Hamsterdam is an arcade brawler/fighting game by the team behind Muse Games. You play as the hamster hero, Primm as he makes his way through the mean streets of Hamsterdam on a journey to take down the Vermin Gang and save his beloved grandpa. The game takes a little bit of everything when it comes to fighting. It’s like a beautiful mashup of a reactionary game, a rhythm game, and a button mashing brawler. Each fight has you tapping and swiping in the right succession as you take on multiple enemies at a time. I have been really impressed with the game so far! The characters are charming and the fighting is an absolute blast to play. Muse did a great job making every level unique in its own way. You have straight up brawling, side scrolling/platforming, bonus levels, boss fights, you name it. You can also purchase new outfits with their own special abilities. Hamsterdam is an instant iOS classic. It’s highly polished and oozing with charm. I feel sorry for anyone that doesn’t pick this game up. 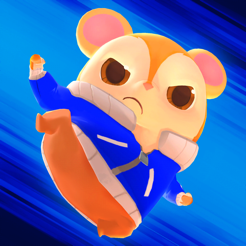 Hamsterdam is also in this week’s SNAPP Roundup!