Built for Speed 2 is developer, Meizi Game’s sequel to their under appreciated gem of last year, Built for Speed. I absolutely loved that game and it just didn’t take off as much as it should have. This time around, Meizi has upped the ante on just about everything! The visuals, the vehicle physics, the little details like the smoke coming off the tires. The upgrade system takes a lot from most F2P games with random cards that you can win from “boxes”. That’s my only big issue with the game is the random part drops and the whole “VIP” subscription thing for the impatient. Luckily, It looks like there’s nothing locked behind paywalls, there’s no fuel timers, and there’s no “pay-to-win” mechanics. I’ve always been a fan of top-down racers on mobile and Built for Speed 2 definitely scratches that itch. Although, I do miss the pixel art from The original game, the sequel does a lot of things better this time around. There’s a ton of cars to unlock and a big variety of races. If you’re a fan of arcade racing games and don’t mind the randomness of F2P games, Built for Speed 2 is definitely worth a spin. 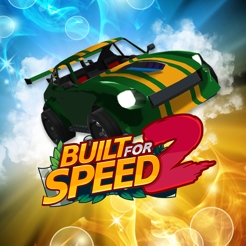