(SNAPP Reviews aren’t really a full-fledged game review as much as they are just a way for us to give you a quick “heads-up” on whether a game is good or not. It usually means that we haven’t finished the game yet, but have played a good enough chunk to know if it’s worth your time/money.)

Blow Em’ Up is a top-down arcade shooter by developer/publisher, Xin Games. The military accidentally runs into a hidden alien base in Australia. So, the military decides to use their new found technology to go after the aliens on their own turf. You control an armed jeep/humvee as you take on waves of enemies. The controls are simple with a v-stick to steer your vehicle and 2 buttons for shooting and grenades. I would have rather had dual sticks instead of the auto-aim mechanics, but it’s a personal preference I guess. Gameplay is fun, but nothing really stands out. You drive around shooting at enemies and picking up survivors. The levels are randomly generated to keep things from getting too repetitive and the comic-style storyline is a nice touch. It’s honestly not a “bad” game. It feels like a title that would have been great in the early App Store days. My only real issue is that the uranium you collect to purchase new weapons is VERY scarce. I’m talking receiving 10 to 20 uranium per game when items cost 5000 and up! It feels like you’re getting pushed towards IAPs even though this is a “premium” game. Blow Em’ Up is on the fence of being a solid game. There’s still some fun to be had, but it could have been so much more. 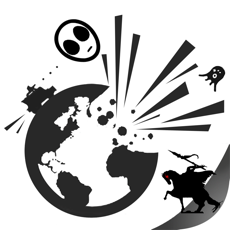