Back in 2016, indie developer, Koukoi Games released a game called, Crashing Season. It was a cool top-down arcade game with some cute characters. Crashing Season Run is an endless runner spinoff with the same theme and cast of characters. The game plays like most behind-the-back runners. You have your 3 different lanes to switch to, swiping up makes you jump, while swiping down has you duck. You have the usual roadblocks and obstacles in your way. CSR does have it’s own unique touches though. The game is highly polished and there’s quite a bit of content. You have different characters, vehicles, and areas to unlock. There’s also boss battles, upgrades, and boosters. The game is F2P, so there’s the usual random loot drops and IAPs, but no timers and multiple currencies. Even though the market has been flooded with them over the years, I still have a soft spot for endless runners. Crashing Season Run seems to fill that spot. It may not be bringing a whole lot new to the genre, but it’s still pretty fun. If you’re not already burned out on the genre, Crashing Season Run is worth checking out. 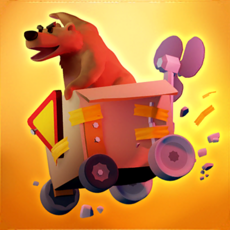