SHAME of the Week is exactly what it reads. The shaming of a game (not developer) for whatever reasons that may be. This could be anything from clones, quick cash-grabs, rip-offs, etc.

We had another solid week for new games on the App Store, but we all know that the digital store is far from perfect. That brings us to today’s games. Originally, it was going to be on a game called, Ryan Run No Way Home. It was yet another game using the popular “Ryan’s Toy Review” character that’s popular with the little ones. That’s when I got to digging…..

I’ve been noticing this side scrolling shooter game for MONTHS! I would see this game pop up on the App Store and for some reason I kept having dejavu. I kept telling myself that I’ve played this game before, but it was never in my purchase history. I thought I was going crazy! It’s a decent looking shooter and plays fairly well minus the F2P stuff. Turns out that it’s just another Unity asset that’s being flipped between a handful of developers. I finally caught it this week because the same game was released under two different names in the same week. Hell, one of them is actually in this week’s iOS Roundup at the moment! (Not for long.) Seeing shit like this is frustrating. This is what clutters up the App Store and gives mobile games a bad name. That’s why these games get the SHAME of the Week! 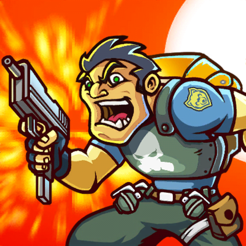 SUPPORT THE HELL OUT OF SNAPP ATTACK! Because you love us!