Spartacus is an all new installment in the Swords and Sandals series by Whiskeybarrel Studios under the eGames.com umbrella. This time around, you play as the gladiator Spartacus as he attempts to break free from the brutal gladiator arena. Whiskeybarrel changes things up this time around by making this installment more of a side scrolling action-platformer. The game itself is absolutely beautiful. The pixel art is well done, the story is good, and there’s a ton of polish. Unfortunately, I felt like I was fighting the controls more than anything. The v-stick is in the middle of the left side of the screen, so I was constantly ducking accidentally. Not to mention, your character moves REALLY fast, so platforming is next to impossible. A floating stick would definitely help a lot of problems. Eventually, I did get used to the speed of the game and started enjoying things a lot more, but I do feel it’s a bit fast. Speed and control issues aside, I think that Sword and Sandals Spartacus is still worth checking out. There’s a bunch of levels, upgradable stats, and even a permadeath mode. With a couple fixes, I could see this game on a lot of people’s lists at the end of the year. 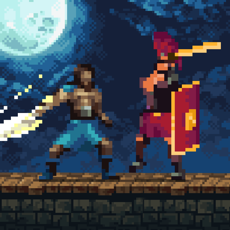