Redroad Escape is an arcade-ish police chase game that recently released on the App Store by indie developer Stanislav Li. The game starts you off on the freeway mid-chase with about 3 cop cars and a helicopter chasing after you. You are watching from like a news chopper, so you have little things like the camera zooming in and the new tag in the corner of the screen. It almost looks like you’re playing real chase footage at times! The physics are more of a realistic approach and aren’t for the faint of heart. When you’re driving slower, you’re able to bump into things without major damage. But the slightest mess up when you’re at high speeds will have you overcorrecting and most likely flying into the guardrail. It definitely takes some skill to get anywhere. The developer really did an excellent job on this game. The controls are great and there’s tons of cars/roads to unlock. My only issue is that a lot of times an ad will pop up as soon as you crash. So, you have no clue what you did wrong. I know it’s nitpicking and you can get rid of the ads with an IAP, but it can really get frustrating. Regardless, if you’re a fan of racing or chase games, Redroad Escape is definitely worth checking out. 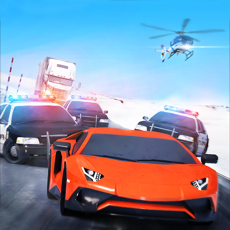 Redroad Escape is also in this week’s iOS Roundup!