Step Hero is a casual roguelike/RPG that recently released on the App Store by the team at KABiART Studio. I actually reviewed their last game, Dungeon Square back when it launched last year and absolutely loved it. I’m not sure what they’re doing over there at KABiART, but I’m really liking this one as well! Step Hero is a simple side scrolling dungeon crawler with a fair amount of depth to it. It’s a single-tap game where one tap equals one move across the blocks and when met with an enemy, it’s one tap per attack. There’s 99 blocks per dungeon with each dungeon being randomly generated with a final boss and all sorts of traps and enemies. As you die and try again, you’ll earn coins and experience to level up and purchase new gear in the shop. This is one of those games that open up the more you play. I’ve been having a lot of fun with Step Hero so far. The levels are fairly quick, but have enough going on to keep you playing. I will say that the tutorial was a bit too long for my liking, but that’s just me nitpicking. Regardless, if you’re a fan of RPGs/roguelikes, don’t let this one “STEP” away! (Heh. I love me some puns!) 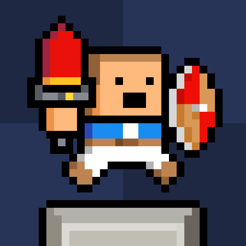 Step Hero is also in this week’s SNAPP Roundup!

🚨🚨(SNAPP Attack really needs your help! If you can afford it, please support the site by joining our Patreon or donating to our PayPal. The future of SNAPP depends on it!)🚨🚨