Battalion Commander 1917 is a vertical shmup (shoot em up) that released on the App Store back in October by Irlysoft. The game is set in World War I where you play as a lone general that’s trying to make it through the battlefield to try and save your comrades. As far as mechanics go, Battalion Commander is your standard vertical shooter. Your character auto-shoots as you move your thumb around the screen to control them. Things start off pretty tough at first. I was only lasting a minute or two before eventually getting killed. But, once you start upgrading and unlocking new allies, things start to feel a bit more forgiving. The game has a mission system in place. After completing so many missions, you’ll unlock a new set of upgrades that you can purchase. There are 70+ upgrades, so there’s enough to keep you playing for a while. Unfortunately, once you unlock everything, that’s pretty much it. There’s no story, no ending. You basically just play until you’ve upgraded everything and eventually get bored of it. I had a lot of fun with Battalion Commander 1917 while it lasted. Unfortunately, there wasn’t much else after you’ve unlocked everything. Regardless, if you’re into shmups and have a few hours to kill, Battalion Commander 1917 is worthy of your time. 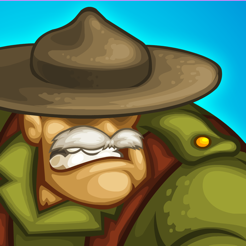