Mmm.Donuts is a fun little arcade game by indie developer, Adam Rogan of AD Game Studio. In this new title, you play as a donut (or is it doughnut?) as you try and evade the police. It’s a simple concept with even simpler controls. Tap the left and right sides of the screen to turn. That’s it. Each level plays out a little differently than others with some having you collecting other donuts (or is it doughnuts?) to finish, or sneaking past the police to find the donut truck (or is it doughnut truck?). You can earn points throughout the game to spend on different flavored donuts to play with. Mmm.Donuts is a fun little take on the whole “chase” genre that’s popular right now. The driving physics are well done and the map is actually fairly big. The different objectives for each level keeps things from getting too repetitive. I would have liked maybe some sort of power-ups thrown in mid-level, but that’s nitpicking. Regardless, Mmm.Donuts (or is it Mmm.Doughnuts?) is a fun little time killer that’s worth killing your time on. 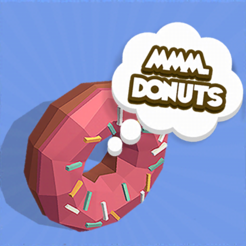 Mmm.Donuts is also in this week’s SNAPP Roundup.