Battle Hunters is a turn-based RPG by the 2-man indie team at Phase Two Games. The story goes that The Kingdom is in danger from a nameless villain. The only thing holding the the villain back is an old wizard. You play as three heroes that set out to help the wizard in his battle to save humanity. There is just so much that I like about this game so far. First off, the battle system. It’s a mixture of turn-based and real-time that is perfectly executed. Every time I thought to myself, “This game needs this.”, it ended up popping up at some point. I will say that the game is a bit on the tough side. It’s definitely not a game that you’re going to speed through. (There are 3 difficulty settings if you are having trouble though.) And with so many heroes, it’s tough deciding which ones to stick with. Regardless, I’ve been having a lot of fun with this game so far. The story is well written, the visuals are charming, and there’s a ton of content with over 25 heroes to find and level up, a large map, and a 16+ hour campaign. I can already see this game being on a lot of people’s GOTY lists. If you’re a fan of turn-based RPGs, Battle Hunters should be on your device right……NOW! 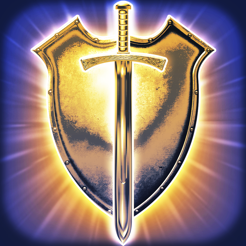